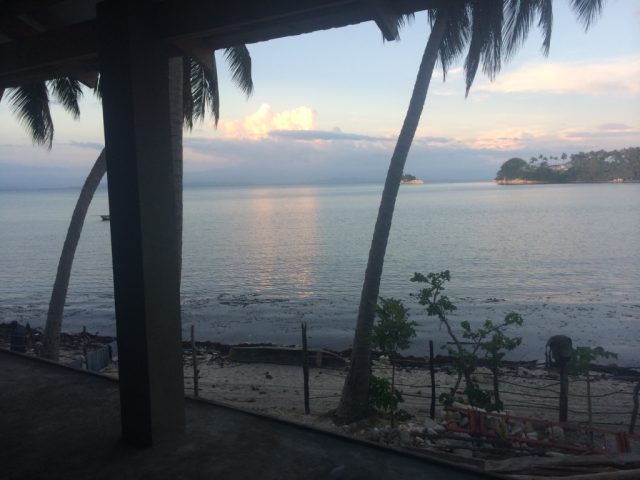 The beach in front of the base

“What is that commotion?  Can’t they let a fellow sleep?” It was still early with the new day just dawning when I rose to see what was going on.  The poor lady Joceline for whom I had prayed the day before was raving mad on the beach.

She was swimming out to boats to throw things into the sea from them till someone would go out and beat her with cords till she would retreat into sea. Eventually she was chased again to the beach stark naked and out of her mind, speaking an unrecognizable language, and parading up and down.

As I watched and wondered what to do, the whole village looked on and was laughing at her derangement. And I thought, who really is the bigger fool and the most possessed of evil spirits?

A couple of our friends subdued her in front of our house and we bound her hands with a strong cord as she lay naked on the beach caked in sand. As they led her away, I ran in to grab some clothes for her and walked her home. She was calmer if I held her close though she would rave as I prayed for God’s presence and power to free her.

A 10 minute walk and we arrived at her house where I helped her poor old mother wash away the sand from her hair and eyes and body as she lay bound on the grass. We put some clothes on her and they bound her hands and feet and put her down on a blanket on the floor.

I lay by her side and stroked for head and spoke words of peace. She would relax for a while and then fall into another fit and thrash around until she would lay quiet again in my arms. After an hour or so I thought she was resting better and I went home hoping I could find her some help.

That evening she seemed to be some better. She was up and not tied and I visited a bit such as I could with someone so out of touch. This morning about two or three, she was chanting on our porch calling, “Papa Bill”. Then there she was in my room. I got up and put some clothes on and after a short time her old papa and mama showed up.

They asked if I could help them with some money to find help for her in Les Cayes on the mainland so this morning we sent her with her papa to try to find help. They are supposed to go to the general hospital and then to a sanctuary.

For King and Kingdom,

One Response to "What’s Next? Bondye Konnen. (God Knows)"