You are here: Home › Uncategorized › A Team Trip to Janou and Habitat Pics!

The second week of June, the first team to come to Haiti with JUST MERCY since January of 2020 arrived by plane in Les Cayes from Port au Prince: Shaun from MO who has been a diver helping to put in the marine habitats on previous trips,  B.J. from KY who has been on trips with us the last 10 years came along with his wife Erica and daughter Kirsten, and their pastor, Barney.   It was going to be a short but eventful trip.

The team flew into Les Cayes on Tuesday, the 7th, after traveling from the states the previous two days.  Shaun’s checked luggage was delayed so he had to do without many of the supplies he brought.  He wrote the following about that after the trip:

“Without my Body Armour drinks, granola bars, toiletries, and other “necessities”, God stripped me down to what was really necessary.  Clothes and God.  On the first day in Haiti, after an hour riding in the back of a pickup truck and 2 hours on a boat, my right leg was extremely burnt.  At least it looked that way.  But all week and the next, it never hurt.  It looked awful but never stung.  God didn’t want my mind on me and my petty problems.  He wanted me to see the needs of those around me.” 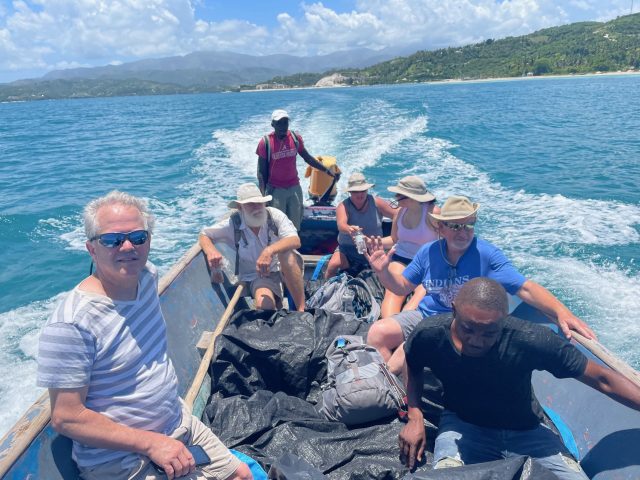 The team visited in Bedzimel for awhile before  motoring over to Ile a Vache.  They got to see the progress on the church building the village had started a couple of years ago, getting the foundation in.  We had recently given them some funds to get started on the block walls and another friend gave some for that purpose. The people are so excited about the progress being made! 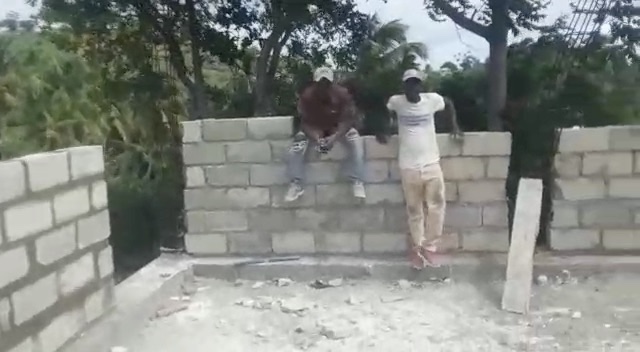 Progress on the walls of the church at Bedzimel!

After a day resting from their trip, the team sailed back across to the mainland, rode in the truck to the trailhead, and headed up to Janou.  It is a grueling hike.  B.J. and his family stopped about half way up the mountain, realizing they wouldn’t all be able to make it.  They spent the night in a primitive village while Bill, Shaun, and Barney continued up the steep mountain side. 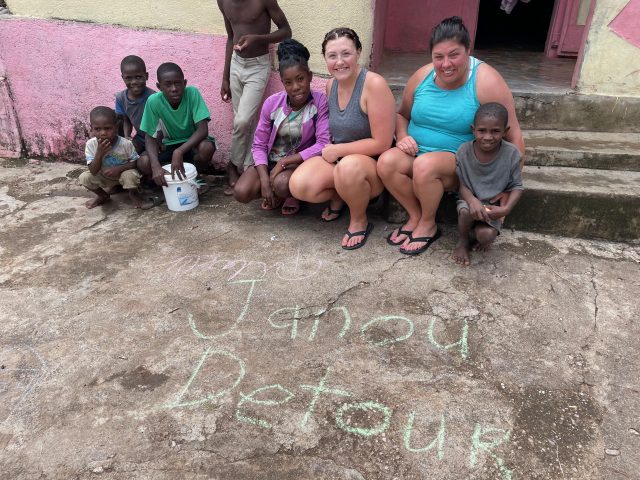 Erica and Kirsten with village children.

“Four years ago, the hike up to the mountain village of Janou pushed me harder than any previous mission trip anywhere that I had taken.  But this trip, it didn’t seem nearly as bad.  Maybe because I knew what to expect, but more likely because God didn’t want my focus on me.  God seemed to be lifting me up as I climbed during the approximately 5 mile hike.”

Headed up the steep mountain path

There were two purposes for the trip up to Janou.  One was to check on the progress of the start on the church/school building we are starting there.  The cistern is being dug, the rafters cut, and blocks made.  The cement bags and sand have to be hauled half way up the mountain on a mule to a river, the blocks made there, and then the blocks hauled the rest of the way up to Janou.  It had been hard to make a lot of progress as it had rained every morning in May.

The second was to do a gift distribution for the village children, many who had probably never had a gift before.  We are grateful to those who gave at the end of 2020 in preparation for the gift exchanges we hoped to do.  The children received toiletries, school supplies, underwear, and a toy.  They were delighted! 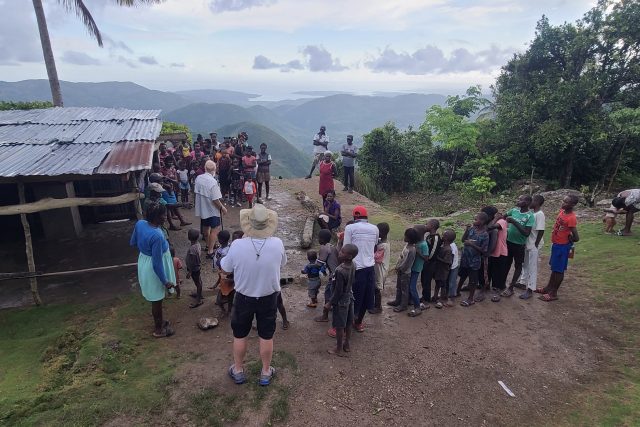 Children in Janou lined up for the gift distribution

After spending the night in Janou, the guys started back down, picking up B.J. and his family on the way.  His daughter, Kirsten wrote:

“After arriving in Haiti, it was rough… especially getting used to the heat. Then trying to hike up the mountain to Janou, in which me and my mom barely made it half way up the mountain, which resulted in us getting to stay with some very nice people in their home. The highlight of this trip for me, though, was getting to share a song that dad helped me translate, so I could share it with some of the people there. I still got to share a special moment worshipping Jesus with them.

Reflecting back on the trip, it made me realize how unappreciative we are back at home. I hope that God would continue to use the experience of this trip throughout the rest of my days.” 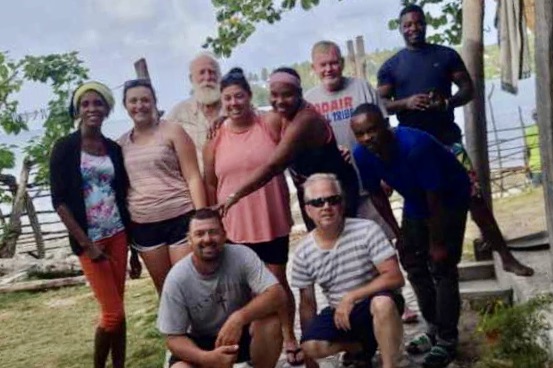 The team with Haitian friends and helpers

“We went back to Ile a Vache the next day and the following day we dove down to the three artificial reefs that had been built over the last 3 years.  Seeing the fish using them to hide and breed, all the soft and hard corals, anemones, and other sea creatures growing and thriving on the reefs gave me such a satisfying feeling!  Knowing that for decades to come, they will continue to bring back the life, the fish, and ultimately the food for the people there brings such joy.  People have a hard time listening to someone tell them about a loving God when they aren’t sure where their next meal will be coming from.

There are so many projects, so many needs, and so many opportunities for ministry in Haiti that it seems too daunting, too “Impossible”.  But God is in the habit of doing the Impossible.  God showed me that the impossible is when we look at the laws of nature instead of the creator of nature.  Maybe it’s time to let God do the impossible. Maybe it’s time we let God be God!” 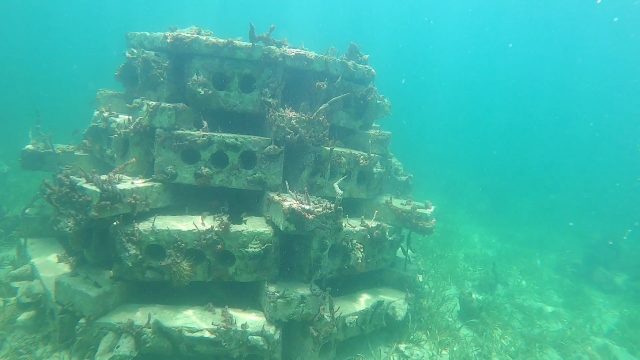 A marine habitat after some time!

Because it is so dangerous to travel across Haiti by land, Bill left when the team did on Saturday on their chartered flight to PAP and then to the states. There were some things at home needing his attention but he plans to return to Haiti in mid July and spend some time up at Janou to facilitate the building of the church/school.  We are so grateful for those who come and those who give so that we can continue to share God’s love in Haiti.

A water break on the trail to Janou

The village B.J.’s family stayed at on the mountain

The beautiful view from Janou 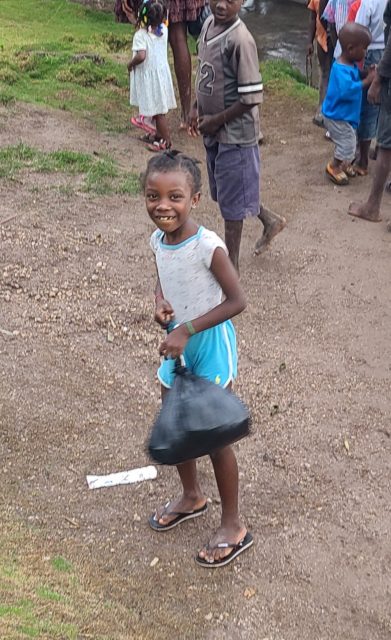 A delighted child with her gifts. 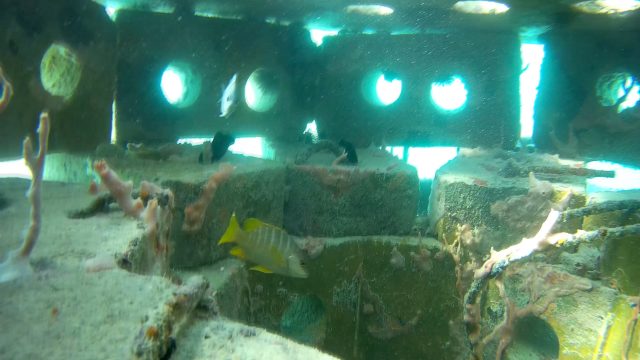 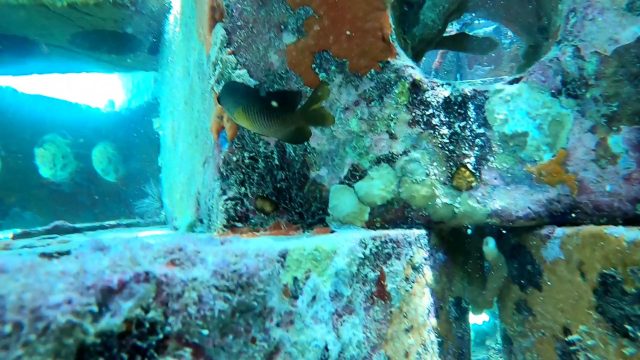