You are here: Home › Uncategorized › God Opened the Doors!!

Bill DID get to Haiti this past week!  God opened the doors!  It was amazing!!  All commercial flights were fully booked except for one seat that they wanted $2000 for.  I was extremely disappointed that this major airline was price gouging good people trying to get to Haiti to help.

Missionary Flights International told us Monday that they had a flight leaving early Wednesday morning going to Port au Prince.  If Bill could get to FL on Tuesday, he could catch it.  So he flew to FL on Tuesday, rented a car, and drove north to the MFI base and hospitality house where he stayed the night and was able to catch the flight to Haiti the next morning.

Monday we hadn’t been able to find a flight across country to Les Cayes from PAP till Friday so we thought Bill would have to stay in Port au Prince for two days.  But Wednesday morning, he got a call back from Missionary Aviation Fellowship and he was able to catch a flight to Les Cayes straight from his arrival at the PAP airport on Wednesday!!  Talk about doors opening!!  We are so grateful!

Pierre was waiting for Bill at the airport and they took motorcycle taxis back to the sea where they took a taxi boat to Ile a Vache.  As they rode through Les Cayes, the road was open but they could see the damage to the city just as you’ve seen on television.  So devastating! 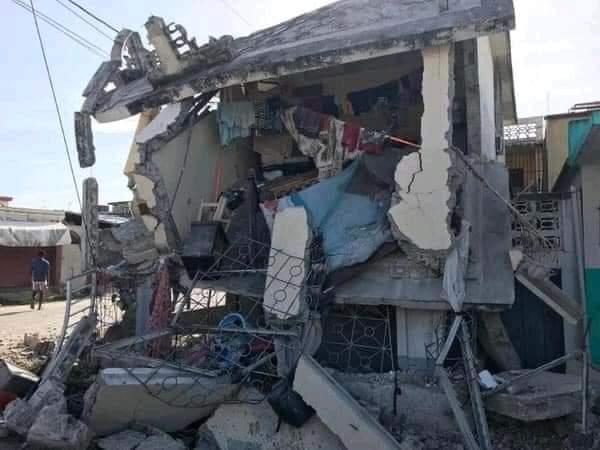 Pic of Damaged house sent to me by a friend

The next day, they headed toward Baiu de Mesle (Bedzimel) to see the damage there.  The sargasso grass in the sea is terrible right now and they had to paddle through a wide swath of it, unable to use the motor, taking so much more time to get there!  ! 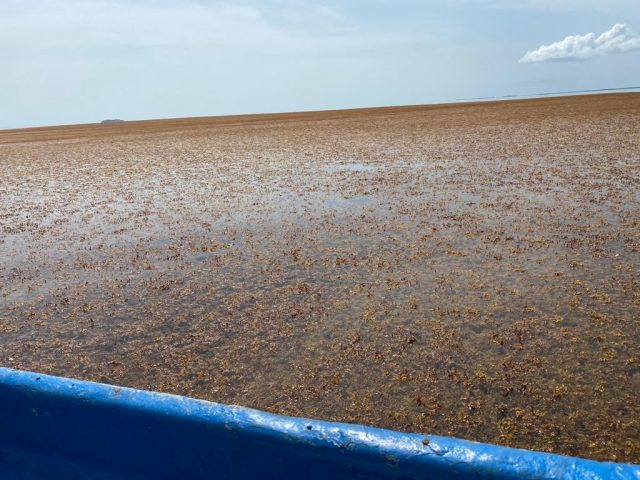 Sargasso grass on the sea

We had heard that most of the houses had collapsed but that is not the case.  They are not concrete block as so many houses are in Haiti.  The houses in Bedzimel are built with posts placed every few feet and beams placed across the top of them.  Then the spaces between the posts are filled in with debris held together by concrete.

What happened to most people’s homes was that the earthquake caused those debris walls to collapse.  We were so glad to know the people had still had some shelter from their roofs when the tropical storm hit a few days after the earthquake but of course, the wind still blew the rain into their homes through the gaps in the walls. (Scroll down for additional pics below the update.) 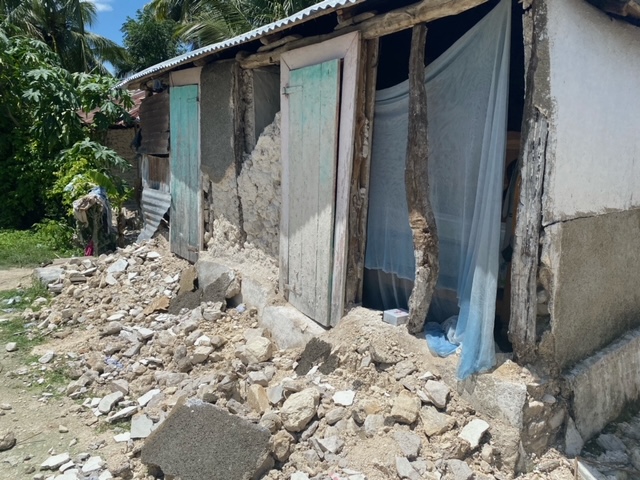 Collapsed walls on a house in Bedzime

Some homes need major repair with several walls down.  Others not so much.  The church walls in Bedzimel appear to be intact and solid except for just a few blocks that fell.  Praise the Lord!! 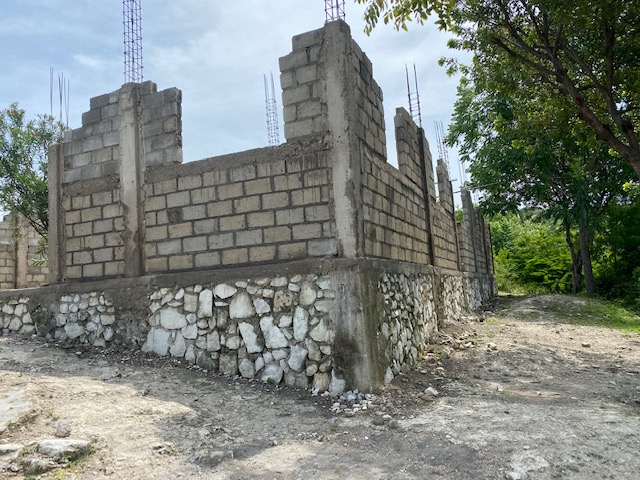 Our original plan to finish up the church as quickly as possible is still what we want to do while we start repairing people’s homes.  Bedzimel has no jobs, no industry except fishing, and the people have no way to purchase concrete to repair their homes.  We asked Pastor John to make a list of the people in the church and how much repair each of their houses need and we will start with those.  JUST MERCY will buy the materials for both the church and the houses and the people will do the work.

On Friday, we received information that said we could pick up several bags of rice at a certain place in Les Cayes.  The people are hungry and we hoped to get enough to share with Bedzimel and Janou.  So Bill and helpers made the arduous trip back across the sea to Bedzimel, got our old truck started, and drove the two hours to Les Cayes.

Unfortunately, when they got to the distribution point, no supplies to speak of were there.  It wasn’t really anyone’s fault.  Things are such a mess in Les Cayes, as you have probably seen on the news, and situations are constantly changing on the ground. Distribution points have been changed on short notice.  Communication is difficult.  We were just sad we were not able to get the rice to share with the hungry villagers.  We will try to find some elsewhere.  So back to Bedzimel they drove and then back across the sea, not an easy trip.

Next week, Bill hopes to make the trip to Janou to find out the situation there but we have been told there is no way to even take a mule up there now.  The earthquake blocked the trail with boulders that will have to be climbed around so it’s going to be an even more grueling hike than usual!  Please pray for Bill that he will be able to make that arduous hike as he is still not 100% back after having Covid.

For some good news, some of you may remember the last time Bill was in Haiti, a neighbor’s home had a roof that was leaking very badly!!  We provided the metal and he cut the rafters and was able to reroof his home.  Fortunately, the family did not sustain any damage in the hurricane.  We are so grateful to get to be a part of providing people shelter which will be a main focus in the coming days and weeks. Lord willing, we will be able to access the materials needed! 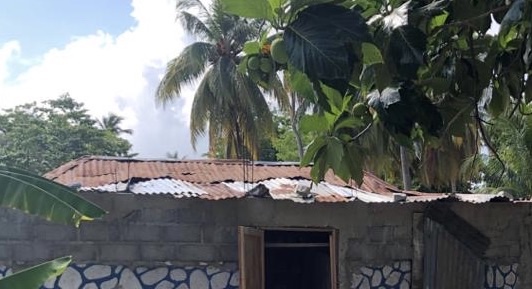 The roof before replacement 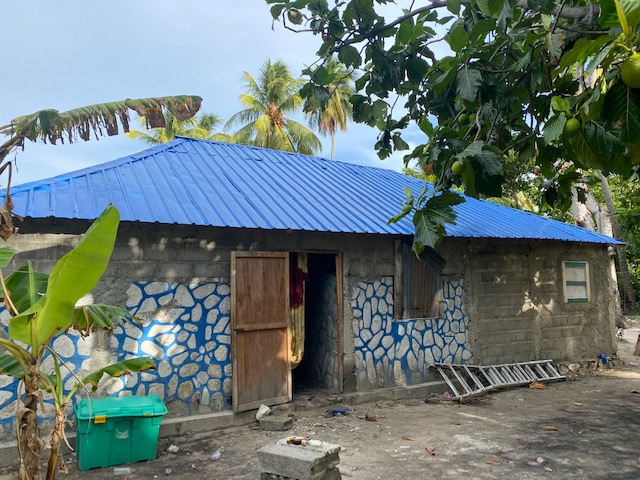 Thank you all for your prayers and those who have given especially to bring relief to the people of Haiti that we work with.  God bless you all! 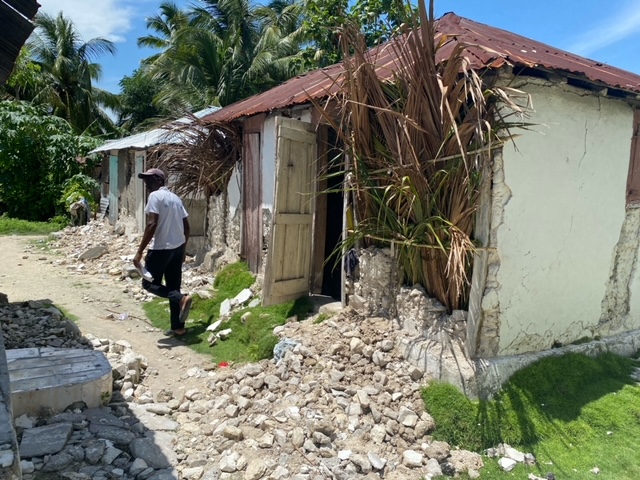 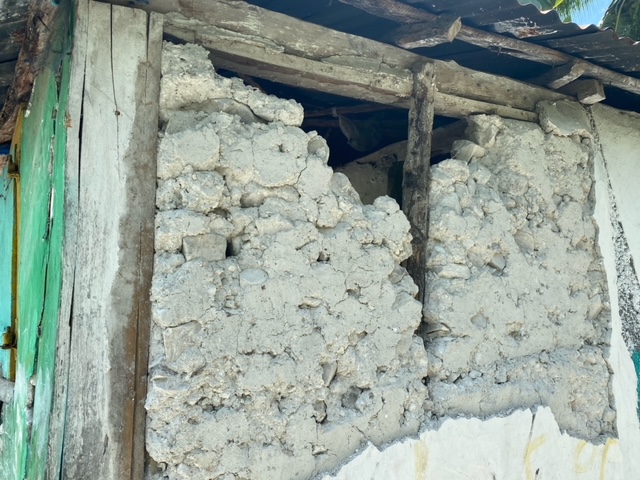 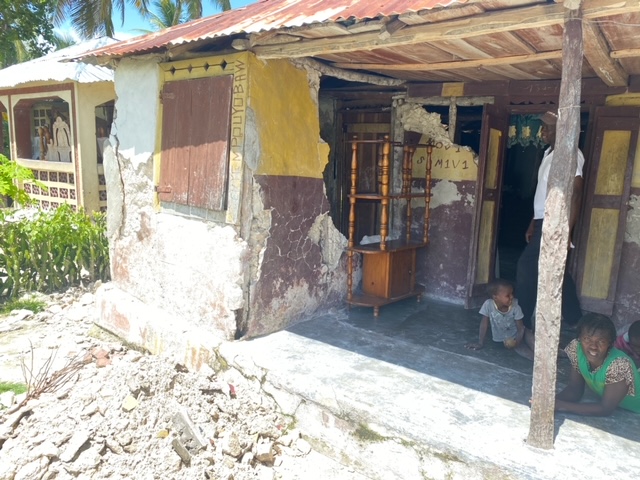 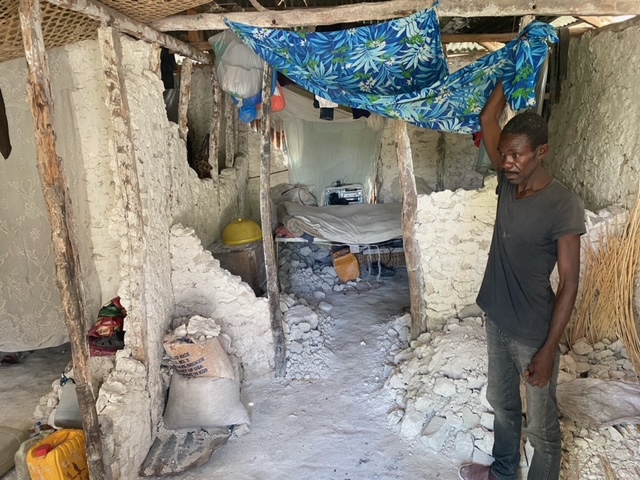 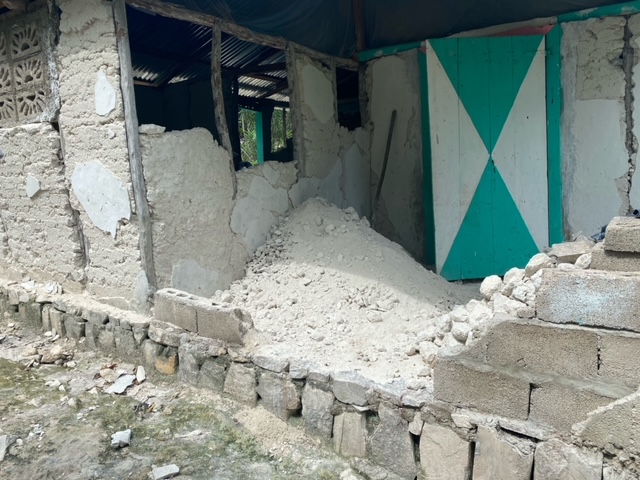 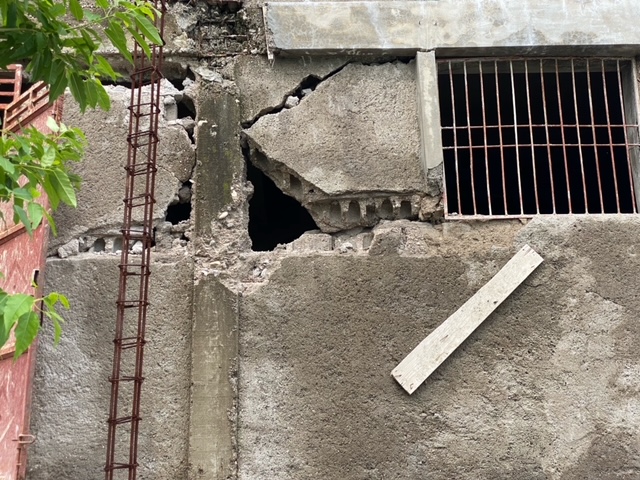 One Response to "God Opened the Doors!!"