Bill came home last spring and just before his return to Haiti, he injured himself working here on the farm. It took three months to get over that. Then his return was planned in August and he got sick. Twice!  It was the longest he had been home since JUST MERCY started working in Haiti in 2010.

He finally made it back to the island in September.  People there were glad to see him. They had been worried because he had been gone so long and word had gotten out that he had been injured and ill. He sent the following story about a woman he met last year who continued to come to the base and pray for JUST MERCY while he was gone.

Ephesians 6-12 – For our fight is not against any physical enemy: it is against organizations and powers that are spiritual. We are up against the unseen power that controls this dark world, and spiritual agents from the very headquarters of evil. 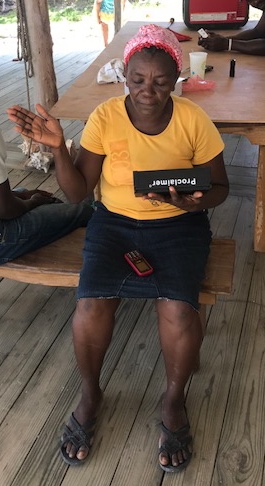 Mama Poul with her new Proclaimer

Who can know what the effects of the prayers offered in the name of Jesus are upon things unseen, the protection and aid that comes to our rescue because one of the saints is making supplication on our behalf? This is where I first encountered Mama Poul.

Outside the corner of our little stronghold here behind enemy lines stood a woman of middle age with her hands in the air, her voice raised in passion and defiance. I couldn’t make out what all the fuss was about.  The words were all in Kreyol and flying so quickly!  What WAS this woman’s problem?? She never seemed to finish.

As I listened, distracted from what I was doing, one of the girls whispered to me,  “She is praying for you, for your protection from the spiritual forces of darkness! She is telling the devil and all his demons they cannot enter here for this is God’s territory and they have no place here!”  She spoke with such authority and conviction, I was glad she was on our side!  There are people on the island who wish us harm because we are there in the name of Jesus.

I made her acquaintance one day as we went to pray together for an invalid, after which we sat together on the porch and talked.  No, she had never read the Bible because she couldn’t read. She had only heard the scriptures and stories of Jesus in church.

I determined she would have a Proclaimer, an audio Kreyol Bible, a miracle to her and her neighbors. I was able to bring one to her in September.  She now can hear God’s word whenever she likes. Mama Poul, a prayer warrior!

Please pray for the people of Haiti. There are rumors of some upcoming serious demonstrations, possibly worse than what happened in July of this year.  Thank you to all of you who pray for JUST MERCY’s work in Haiti.