You are here: Home › Uncategorized › A Quicker Trip Than Planned

Bill was finally able to return to Haiti on January 11, 2021. Due to the serious political and societal unrest there last year and the Covid problem, he had not been able to be in Haiti since March of 2020. He was so glad to finally be returning.

Due to the unrest and other causes, inflation had hit Haiti hard.  Jobs are always nearly non-existent and last year it got even worse. People could not buy food and a friend who is deeply involved in Haiti had told us last summer that 3 million people there were on the verge of famine. During 2020, thanks to our faithful donors, we had been able to continue sending funds to trusted friends in Haiti in several locations who then bought food in bulk and distributed it to needy families.

Bill wrote, “Estane and Piere Ousel had things all cleaned and looking nice when I arrived for which I was truly grateful. The first morning after my arrival, we put the motor on Piere Ousele’s boat and headed to Baiu de Mesle (pronounced Bed-z-mel) to fix the truck, make some plans about the gift distribution, and visit with the people there.” 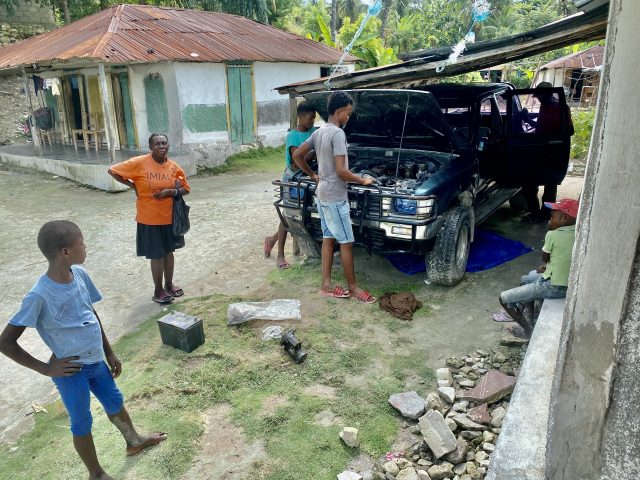 Truck being worked on in Baiu de Mesle

Unfortunately, the old truck required some considerable repair to get it running which is not easy in Haiti.  Two separate days were spent sailing between Ile a Vache and the mainland, getting parts, working on it, and getting it worked on (which is a whole adventure in itself) so that we could pick up supplies and the items that had been flown to Haiti for the planned gift distributions in Baiu de Mesle and the mountain village of Janou.

Just a few days after Bill’s arrival in Haiti, the US issued its new regulation stating no one could fly into the US without a recent negative Covid test starting Jan. 26! We realized Bill’s planned stay in Haiti would have to be shortened considerably as getting a Covid test in Haiti was next to impossible where he was.

Bill had been out the first week visiting folks. They were glad to see him again!. Then came Sunday. Bill wrote, “After church today, people began to come by to offer their gratitude for the help we have sent over the last year. Smiles and thank you’s from old folks, bringing me almonds and cashews, fruit and fish. It’s a bit overwhelming. I can only answer them with the truth. I am only the hand. The gift came from God and the hearts of people that love Him. Thank you, Jesus. 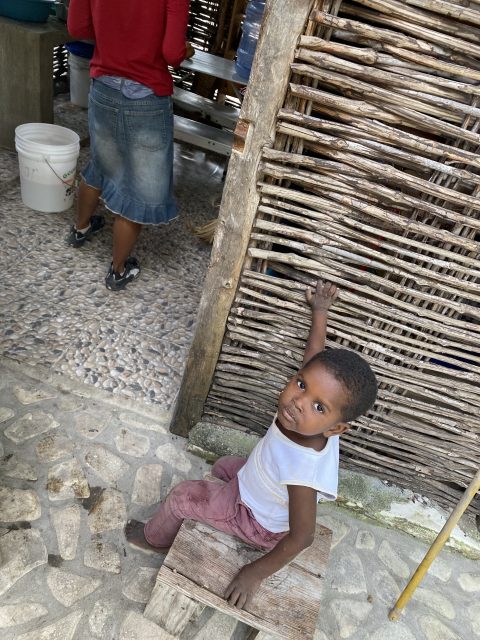 I believe it was four years ago we heard a new born baby had been abandoned in the bush by a young lady. We had to send him to the hospital. There was a lady named Jani that took him in. We lend a hand now and then. Hadn’t seen the baby in a while. There he was playing outside our kitchen, a little person who looked just like his papa. His name is Lukin. Pray he grows up to be a good man who loves God

Jani, his caregiver, just died this month. She was a really nice lady. We all mourned her passing.   Now he lives with Jana,  Jani’s daughter. A good thing to have been a part of. I remember the day he was found and they called us. Who would have thought what that day would bring? As they say in Haiti, ‘Bondye konnen.’ God knows.“ 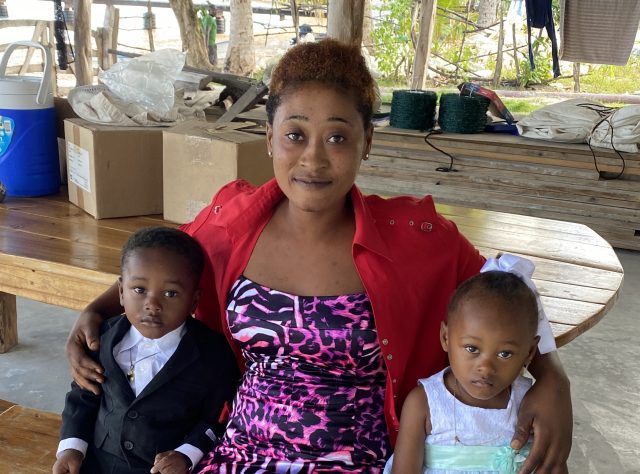 Vanitha with her twins Phedre and Phedora

Some of you may remember the story of the lady who gave birth to one of her twin babies, was unable to have the other, and the ordeal of getting her across the ocean to Les Cayes where Bill practically carried her through the streets to the hospital, insisting there that she had to be seen NOW, saving her life and that of her baby. Here they all were, dressed up to come and visit.

B.J. and some friends had been scheduled to come to Haiti at the end of January to build another marine habitat and help with the gifts distributions. They had to cancel their trip due to the Covid testing requirement and we had to cancel the gift distributions. Unfortunately, there just wasn’t enough time to gather the remaining items and hold both events before Bill had to leave.

Bill returned to the U.S. on Jan. 25th, regretting the hurried return but looking forward to going back soon. We understand that the Port au Prince airport may be getting Covid tests for passengers. If so, it will be possible to get in and out of Haiti. We will leave you with something Bill wrote while thinking of all the problems in the world these days.

“I was returning from a trip to the mainland after working all day on the truck. About 11 miles and a few hours on a rolling sea. Laying back on the little wooden sailboat looking up at the night sky, so full of brilliant stars in infinite space, I felt comforted seeing just how big the Father of mankind is and His love vast as the sea!  ‘A great Good is coming to thee, a great Good is coming.’

For King and Kingdom! – Bill” 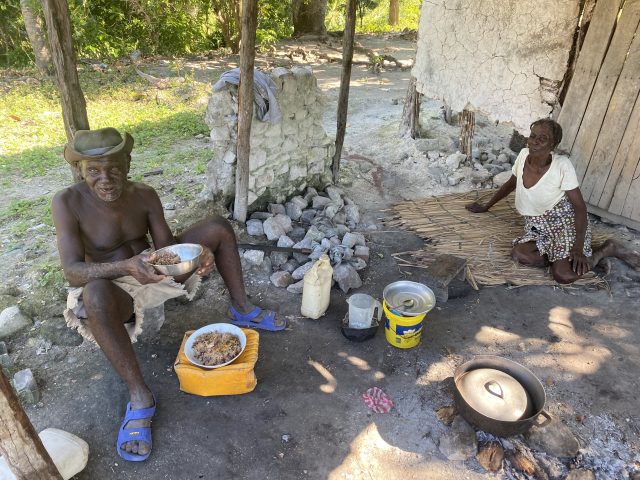 Old folks glad for a visit 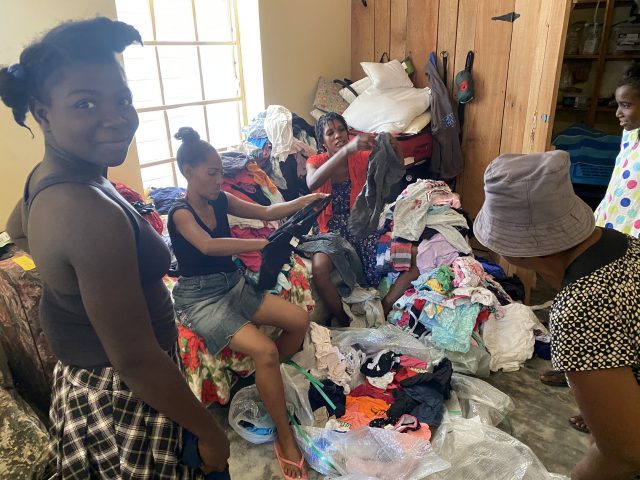 Sorting clothes for the gift distributions 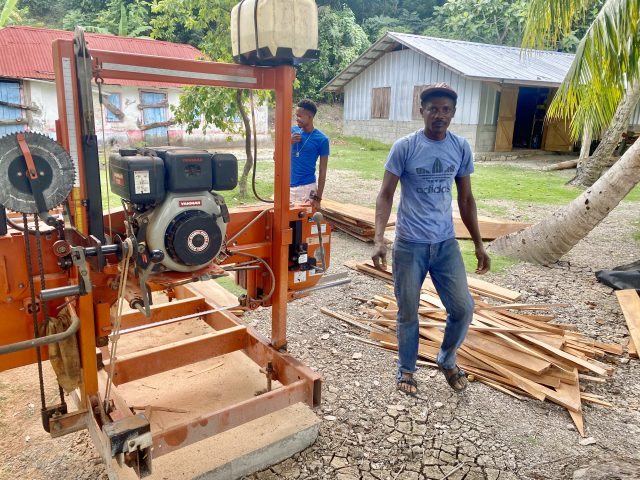 Men working with the sawmill 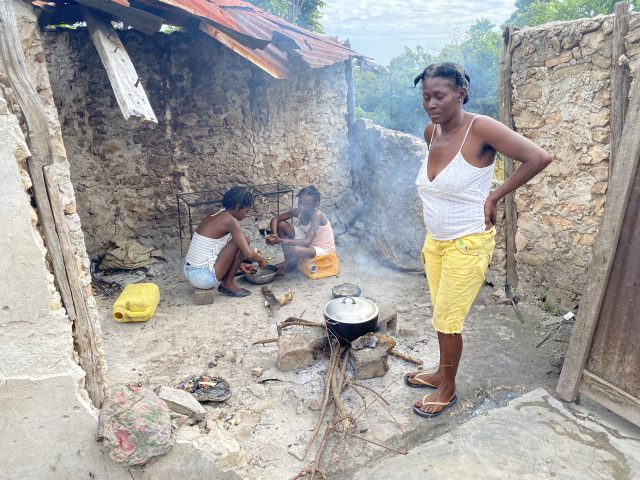 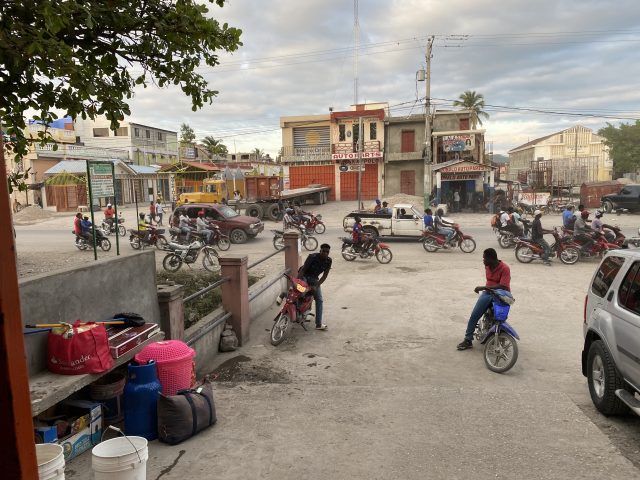 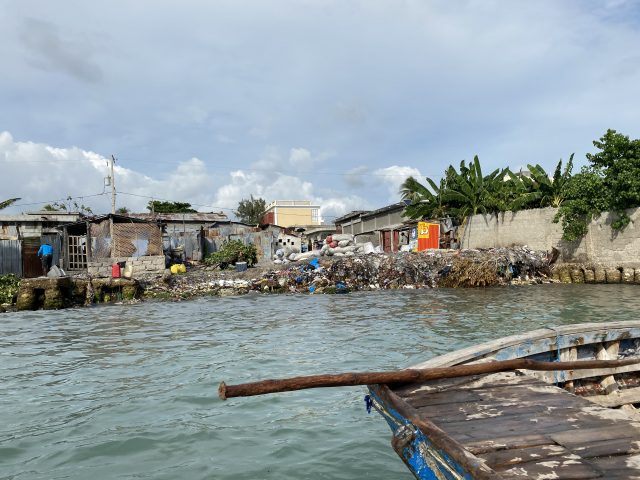 Les Cayes landing (with a lot of trash on shore)

5 Responses to "A Quicker Trip Than Planned"